19 SepAustralasian and UK rail industry to develop a new partnership

The Australasian Railway Association (ARA) and the UK’s Railway Industry Association (RIA) have announced today at Innotrans 2018 in Berlin that they are forming a Memorandum of Understanding (MoU) on behalf of their various memberships, that will see both organisations working closer together.

The Railway Industry Association (RIA), the representative body for UK-based rail suppliers which has 220 rail companies in membership, and the Australasian Railway Association (ARA), the Australasian rail body which has 140 members, are signing an MoU, to promote a closer working relationship benefiting the rail supply industries in both countries. 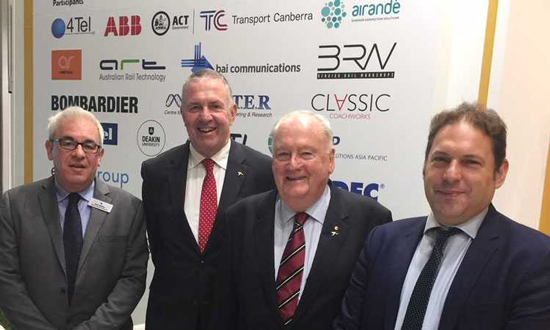 Both ARA and RIA have many common interests and deliver common services in their markets, which face similar opportunities and challenges. Both the UK and Australia rail sectors are expected to see continued significant investment in rail, but face issues recruiting new entrants into the rail industry, upskilling those already in the sector, smoothing out rail funding pipelines, and promoting the benefits of rail as a key driver of economic growth.

A number of multinational rail companies are members of both trade organisations already.

Darren Caplan, Chief Executive of the UK Railway Industry Association (RIA) said: “This partnership with the Australasian Railway Association  is a truly exciting opportunity for RIA and the UK rail industry, in the months ahead. It is a great example of an industry reaching out to fellow colleagues across the globe, to develop new trade links and cooperation, which is especially important as the UK prepares to leave the EU. I see lots of common ground to form this working relationship, for the benefit of both RIA, ARA and our respective members – and we look forward to collaborating in the very near future!”

Danny Broad, Chief Executive Officer of ARA said: “Future engagement with the Railway Industry Association of the United Kingdom will provide potential benefits and opportunities for all members of the Australasian Railway Association including our passenger and freight operators, track managers, suppliers, manufacturers, consultants and contractors. It’s an extremely exciting time to be in the rail industry in Australia and New Zealand with investment in new rail infrastructure and rollingstock over the next fifteen years forecast to be around $100b. Working and collaborating with the RIA on common industry challenges will provide consolidation of ideas for possible suitable outcomes for the rail sectors covered by both the ARA and RIA.”

1. About ARA: ARA represent an array of rail organisations, including private and public, passenger and freight operators, track owners and managers, manufacturers of rolling stock, construction companies and all other organisations supplying and contributing to the Australasian rail sector.  In 2016 Australian rail’s total economic contribution was $26 (AUS) billion in GDP, employing over 140,000 workers and growing. www.ara.net.au

2. About RIA: The Railway Industry Association (RIA) is the trade association for UK-based suppliers to the UK and world-wide railways. It has some 200 companies in membership, in a growing industry with the number of rail journeys expected to double over the next 25 years and freight set to grow significantly too. RIA’s membership is active across the whole of railway supply, covering a diverse range of products and services and including both multi-national companies and SMEs (60% by number). RIA works to promote the importance of the rail system to UK plc, to help export UK expertise around the globe and to share best practice and innovation across the industry. www.riagb.org.uk

3. In the UK, the rail industry contributes £36 billion in economic growth and £11 billion in tax revenue each year, as well as employing 600,000 people and exporting around £800million per annum. In Australia, rail’s total economic contribution is $26 (AUS) billion GDP a year and employs over 140,000 workers”